What Are Your Intentions for 2016?

Remember the classic scene in the movie Apollo 13 when astronaut Jim Lovell (Tom Hanks) is guiding the spaceship around the moon after an explosion? He turns to his crew and asks them, “Gentlemen, what are your intentions?” They pause for a second, and each one says, “I’d like to go home.”

Speaking of intentions, a new year is upon us. I want you to think about 2016 in terms of your intentions for the next 12 months. I’ve had the privilege of working with, and learning from, many of you who are successful business owners, entrepreneurs and executives. You’re very intentional about everything you do in life, and the results speak for themselves. When it comes to intentionality, I’ve learned that the eyes only see and the ears only hear what the brain is looking for. So when you’re very intentional about your endeavors, you’re more likely to achieve them.

Sure, many people have the skills, knowledge and wisdom to achieve great things. But if they’re not intentional about what they’re doing, they’re less likely to achieve those great things. Instead of thinking about resolutions this time of year, why not think about your intentions for 2016?

Put it in writing to make it stick

Are you familiar with the “80 Percent Rule”? It’s a rule of thumb that means the first time you try anything new, you do it only at 80 percent efficiency—not 100 percent. If you intend to do something different in 2016, the first step to achieving it is to take out a piece of paper and write “My 2016 Intentions” right at the top. Then below that bold headline, write down just the things you hope to accomplish in 2016. It shouldn’t take more than five minutes.

If you pick up that piece of paper a year from now, I bet you the top three things on your list will be completed, or at least 80 percent complete. If you put down four goals at the beginning of the year, you will probably accomplish three. It’s better to be intentional, not just hopeful, about your goals and then let your money come along and support your personal journey over the next year. It’s so important to personally drive your own train going down the track.

This is a new year. Think big and be intentional about your goals.

We value your comments and opinions, but due to regulatory restrictions, we cannot accept comments directly onto our blog.  We welcome your comments via e-mail and look forward to hearing from you. 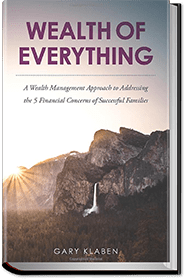